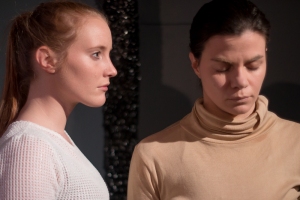 This new play from Emily Holyoake is a pretty classic piece of sci-fi, but try and pick apart quite why it works so well, and it reveals an emotional core that is rare in the genre.

Ren is a stowaway on  a space ship with a shady mission. She emerges from hiding to find the four crew members badly injured and she saves their lives by placing them in suspended animation: the stasis of the title. The action opens a few days later as Ren is trying to piece together the mystery: who sabotaged the ship? The greater mystery for the audience is why Ren stowed away in the first place: what is the bond between her and the female ship’s captain, and why has she come so far to apologise? These two mysteries create the suspense that sustains a 90-minute play with a cast of only two: Naomi Stafford as Ren and Ceridwen Smith as a maintenance ‘Hologram’.

Stafford holds the attention both through the routine of her day, and the long arc of her lonely breakdown. Smith plays a machine on a learning curve, as well as the four other crew members whose personalities are downloaded into her O/S. Both actors give wonderful, bright and precise performances.

The sound design and score from Alex Burnett is also excellent, which helps provide an other-worldly, technological future. But this is a pub theatre production and the sets and costumes are basic. Sci-fi often succeeds on spectacle and stripped of this, Stasis reveals itself as a strong, narrative-led drama. It has features recognisable from films such as Dark Star, 2001, Star Trek, Alien, and even Red Dwarf, with a lonely human locked into a relationship with an Artificial Intelligence, in a future run by a dark profit-driven ‘corporation’. Yet rather than the cold spectacle and the philosophical musings of much sci-fi it is Ren’s love and sacrifice that makes this such a rewarding night.

Encompass Productions at the The White Bear Theatre, written by Emily Holoake and directed by Liam Fleming. 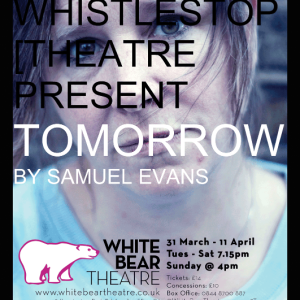 Dystopian fantasy is the dominant genre or our age. We go for zombie apocalypses like the Cold War era lapped up spy dramas. It is there in the Hunger Games, TV dramas like Black Mirror or The Nether from the Royal Court

Are things really so bad?

Mike Bartlett latest play, Game at the Almeida, uses a dystopian setting to write a satire on class hatred but I was left feeling that the style came before the content, and his heart was not really in the political message.

In contrast, Tomorrow, a new play by first-time writer Samuel Evans, produced by Whistlestop at the White Bear, uses the dystopian theme to talk about mental health. It made for a far more gripping and unexpected play.

Game is the story of a young couple who are given a free home on condition they allow paying customers to take pot-shots at them with tranq guns. The man playing the ‘warden’, a kind of game-keeper to these urban assassins, is an ex-soldier who is increasingly traumatised by his work. It is a satire, clearly, though it is difficult to say what it is a satire of. During the siege of Sarajevo, Serbs would drive into Bosnia to take pot-shots at Sarajevo kids and families. Western kids known as The Hilltop Youth will go to the occupied Palestinian territories and play at being settlers during their holidays, beating up villagers or burning down olive groves. The opportunity to be hobby murderers is clearly one that could be made to pay, but whether this is Bartlett’s point, it is hard to say. It may simply be a play about PTSD and soldiers abandoned after war, as images of soldiers replace the young couple when they leave the apartment.

In Tomorrow, the inhabitants of an Elephant and Castle tower block are waiting for the End of the World with the expectation that life will improve. It is no fantasy: the apocalypse is all over the news channel, and people are partying and rioting in the street. Clive cannot leave the block, however, following a nervous breakdown, so he chooses to wait for the apocalypse at home with a small buffet from Lidl.

It is a great idea, well-observed and carefully rooted in the Elephant and Castle, excellently played by a strong cast. The problem that I anticipated – where do you go with the Apocalypse? – is the one that affects all dystopian fantasies: where do you go? what’s it all for? But I was wrong about Tomorrow. It ends upon a note of hope, even as the world is burning. Clive sees that in a world where everyone is on the brink of a kind of madness, the fears and the prejudices that usually surround mental health issues are rapidly evaporating.

I cannot imagine anything worse than a world where judgement really is nigh – but for someone who has always been misunderstood, the prospect that the rest of the world will finally understand comes as a blessed relief.